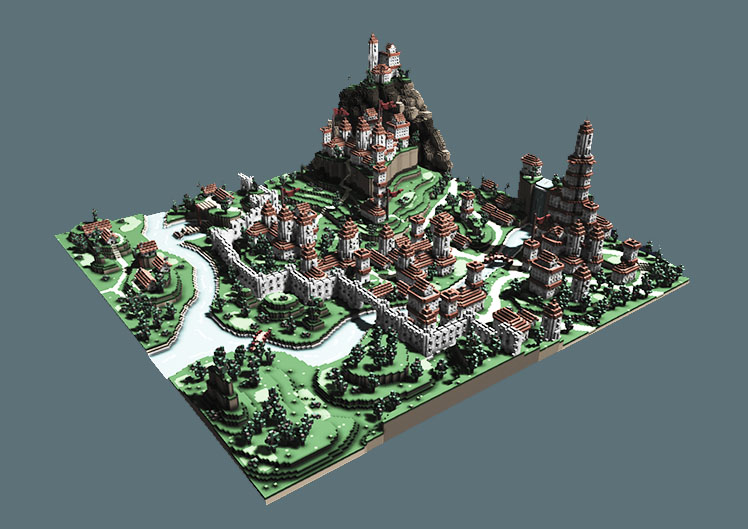 Some time ago I worked with excellent voxel artist Sir carma. This is a screenshot from that project, the art + glow3d rendering.

Screenshot of the editor with DirectX 11 renderer and simple scene with 2 light sources.

I added support of DirectX 11 to Glow engine, which took me couple of weeks. DirectX 11 seems much simpler and better designed than DirectX 9, with less calls to the graphics driver. Source code now is 2 times more compact than the DirectX 9 version. Still, DirectX 9 is supported, and nothing is broken.

I started support for DirectX 11 with hope to fix my issues with Oculus SDK. 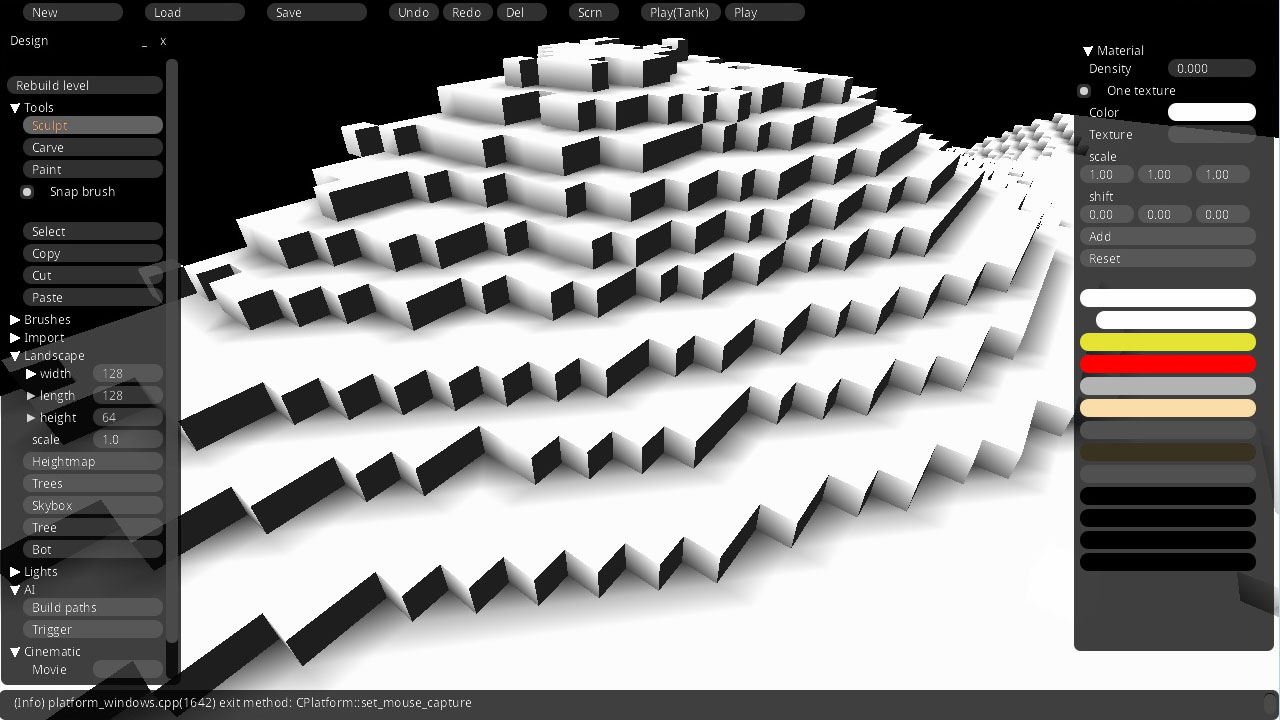 I made a new implementation for ambient lighting, based on vertex colors. Visually there is no difference, but it should be faster. 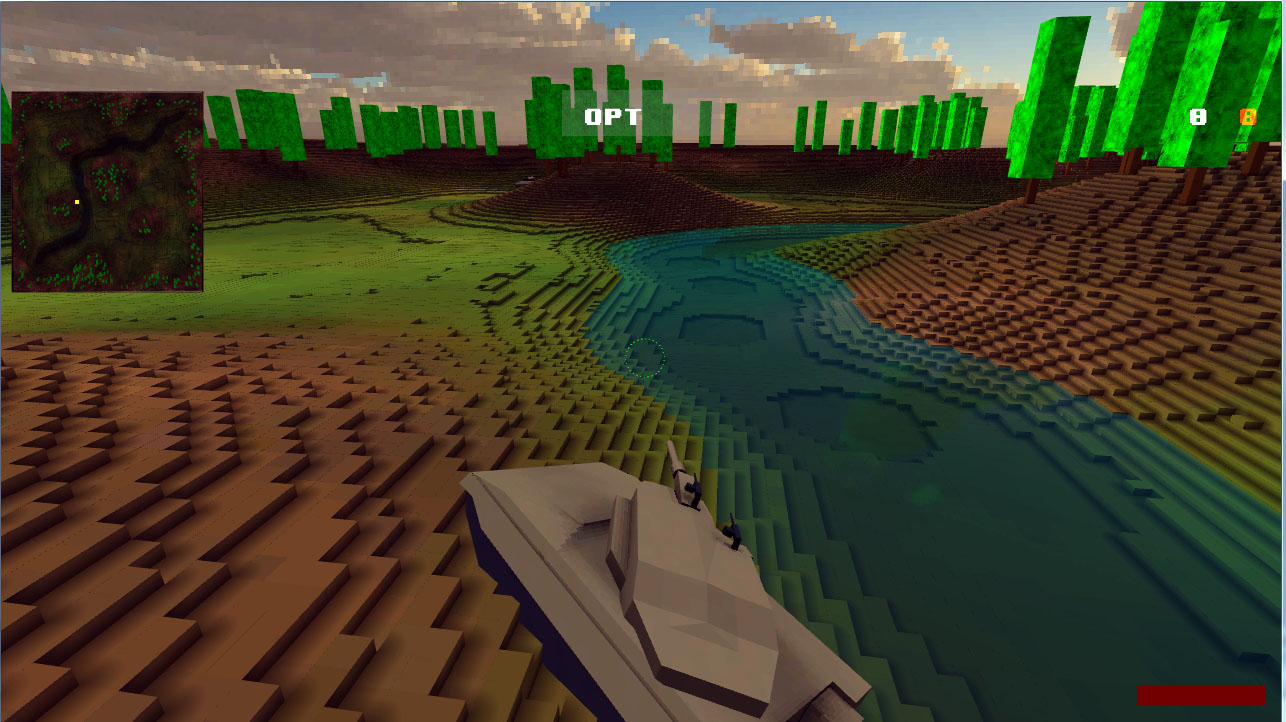 0.31 release for Iron Cube for Windows and Android, tank multiplayer combat in a voxel world. 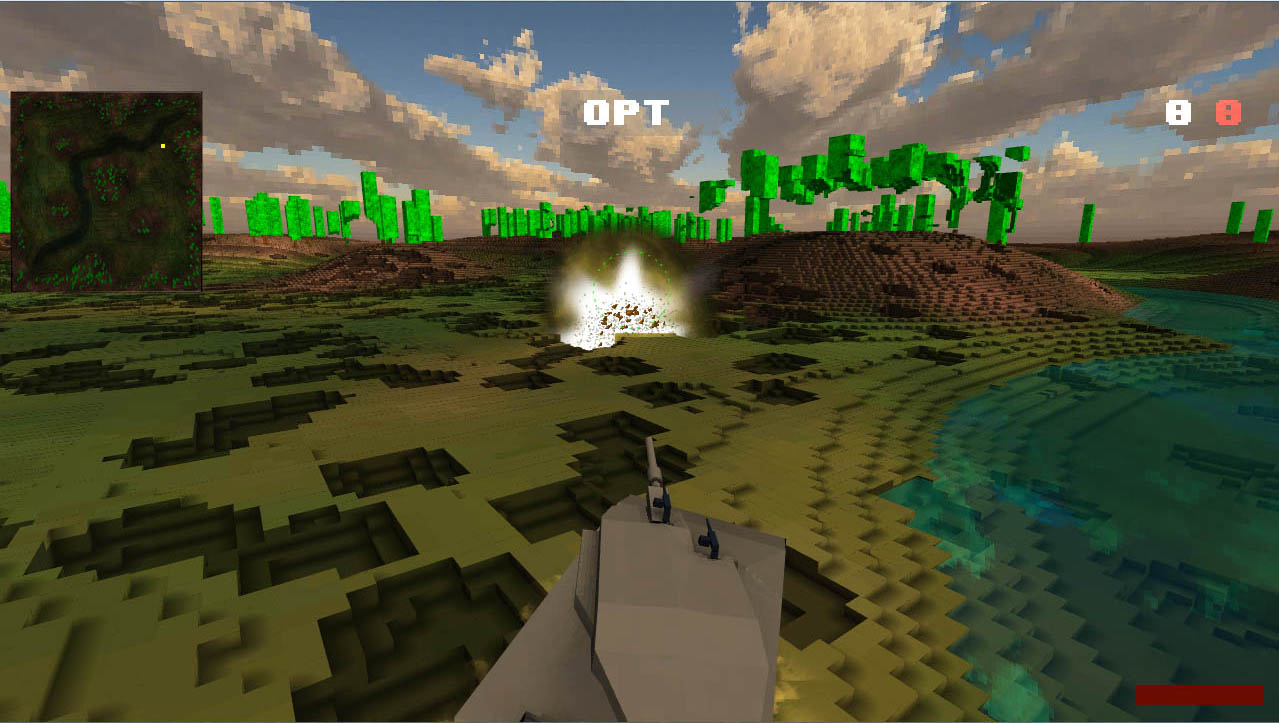 I am running automated tests with Iron Cube - every second some action is randomly chosen - move forward/backward, rotate left/right or shoot. This screenshot was made after hours of tests. The surface is heavily damaged. And surprisingly, there are no crashes or  problems! I’m ready to upload the new version to Google Play Store. 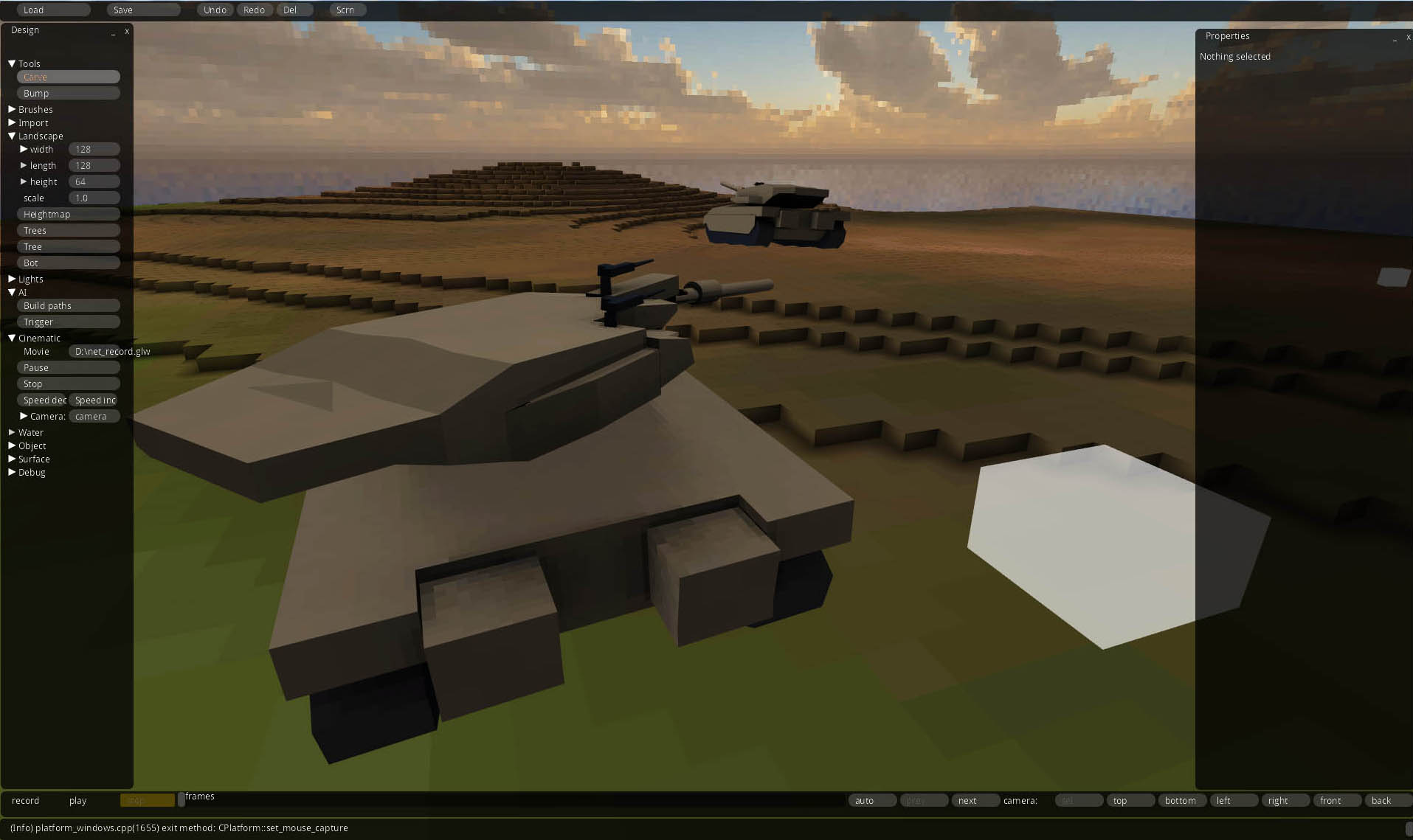 I am debugging some network issues of Iron Cube’s Android version. Saving of network data on the client that arrived from the server became very useful for debugging bugs. You can record gameplay on an Android device and play it back on a Windows machine in the Editor and it helps a lot to fix defects.

There is one bug on the Android version, when bullets are not disappearing from the screen. I hope to fix it soon.


I am reading books and articles about mobile/indie game marketing, and it’s quite interesting. One of the most important things for game marketing is a good trailer, so I decided to add movie recording/playback to Iron Cube and Glow engine.

The task looked complicated but actually has simple solution - to record a game you just need to save all incoming data from a server to a client. Later, in the editor, you can just load this file and emulate network communication from the server to restore the original game. It automatically becomes compressed, because I’m using a snapshot-based system for networking in Glow engine and only changed data is sent between the server and client. For example the movie below is less than 1 MB.

And this allows many interesting options - for example you can reduce the speed of playback to have Matrix-like slow motion! There is no interpolation between frames, so it may look slightly laggy.


I participated in the Intel Perceptual Computing Challenge, stage 2, where I improved my first prototype, which won a First Prize of a 1st stage. Intel SDK was improved since June, becoming more robust. Last time I received a camera one day before my deadline, so didn’t have enough time to properly implement gesture support.

In the current demo, I added several new gestures - the size of brush can be changed by a “zoom” gesture (moving open hands), undo of previous operation is implemented by a “circle” gesture, provided by SDK, start of “potter” mode by swiping up, down, left, or right. Also API was changed from DirectX to OpenGL and lighting became more simpler (forward) to optimize rendering. Save/Load of the model was added. There are many improvements with robustness and smoothness of brush movement there.

It has now become some kind of Paint editor for voxel models. 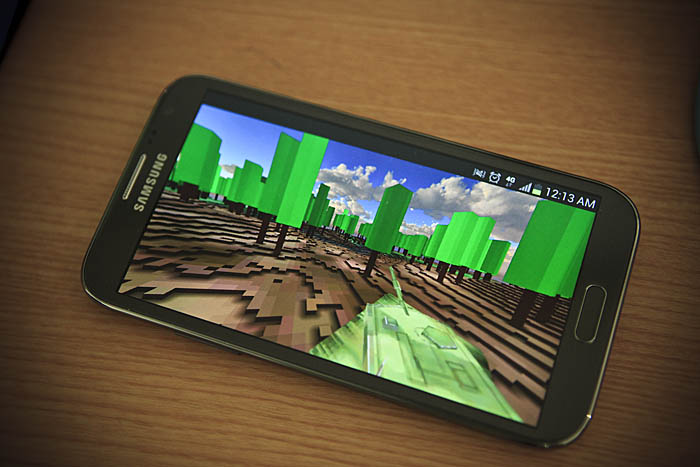 Iron Cube, a tank multiplayer combat game in a voxel world, is ported to Android and available on the Google Play store for free!

Currently there are 3 levels and 2 tanks with different features, the M1 tank is more heavy and powerful, but slower than the Merk tank. 2 players can play by using local Wi-Fi network or by using phones, connected by Wi-Fi Direct. Also it’s possible to compete with an AI-controlled bot. To win you should destroy the enemy tanks 5 times (by the way, the bot is very smart and it kills me very often). Enemies usually appear on the opposite side of the map. After destroying an enemy tank it will respawn.

The environment is fully destructible, the water is dynamic. 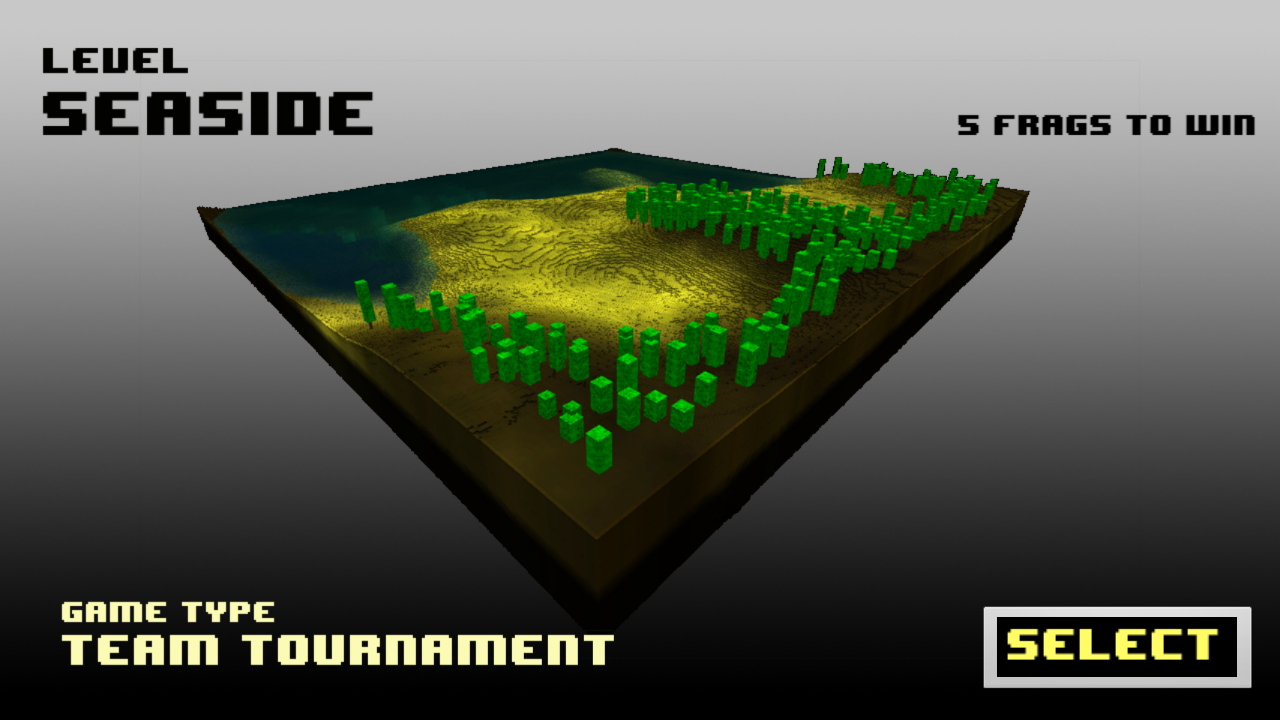 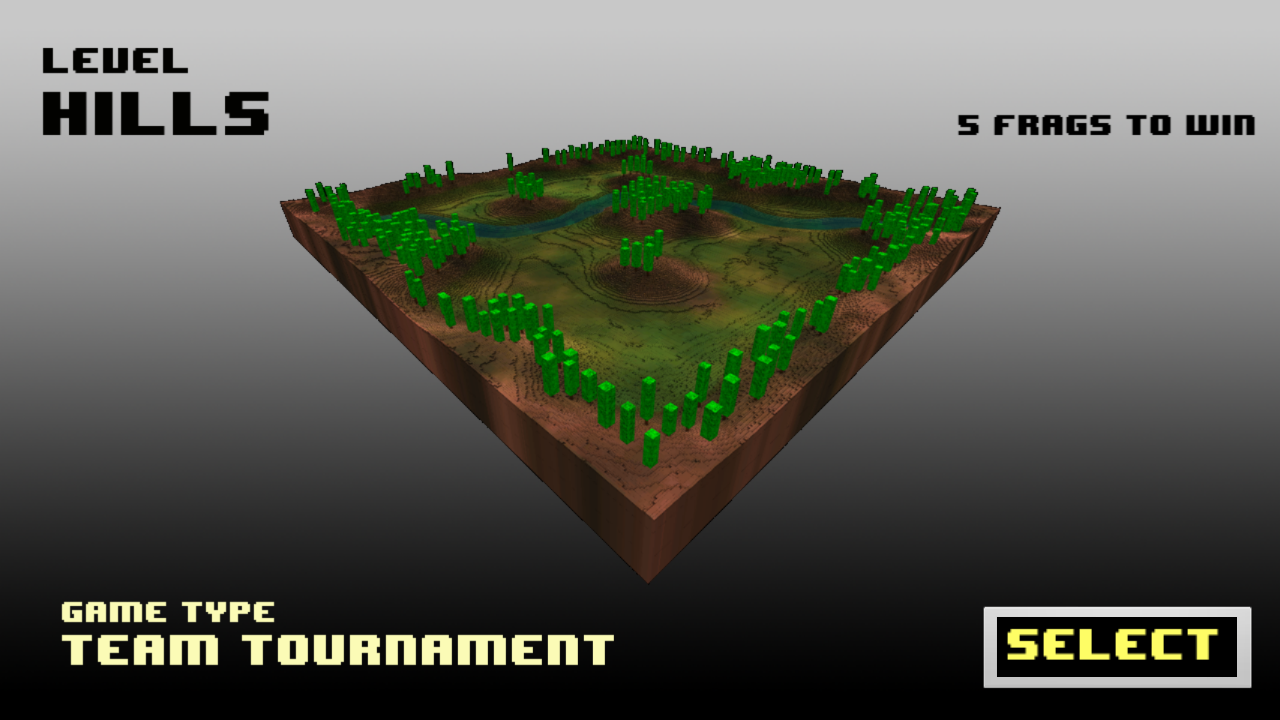 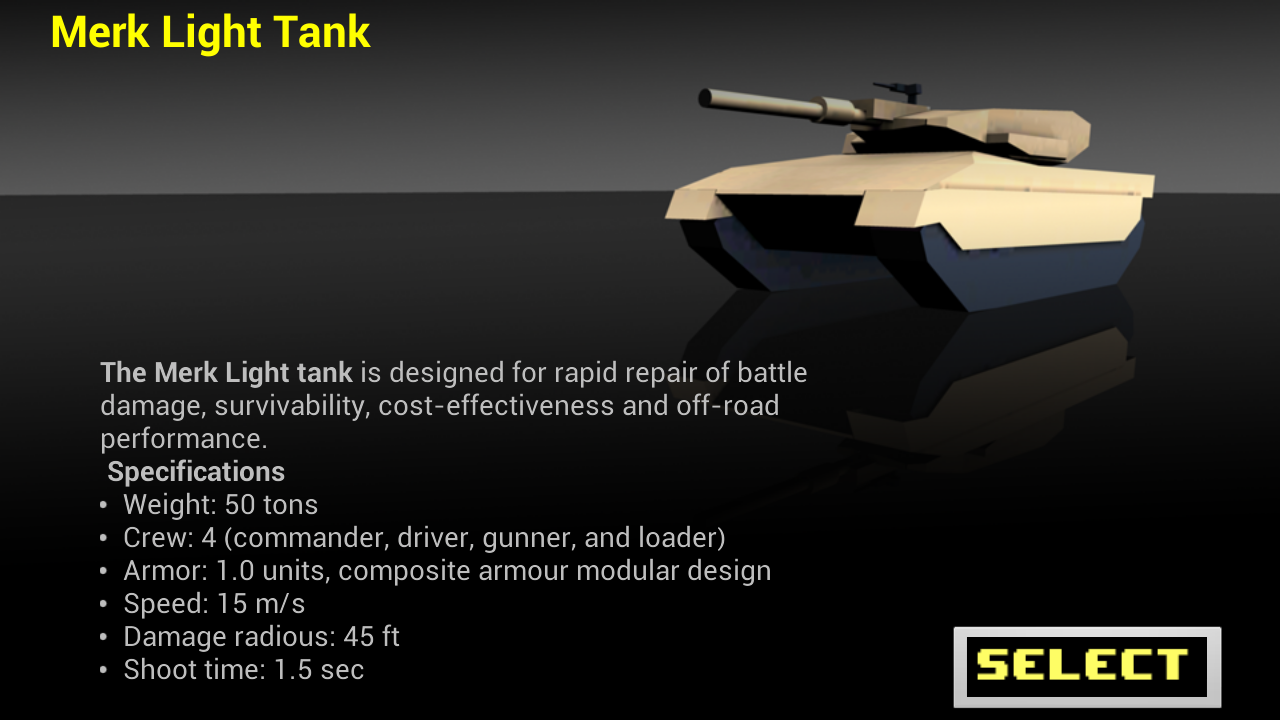 AI Bots are added to gameplay, and they’re pretty smart! (actually not really, a team member still can shoot one of its own friends when one of them is on the line of fire, but it will be fixed soon). They can follow their leader (player), find an optimal way to find the enemy and give way to the player. I am actually thinking how to make them slightly dumber.